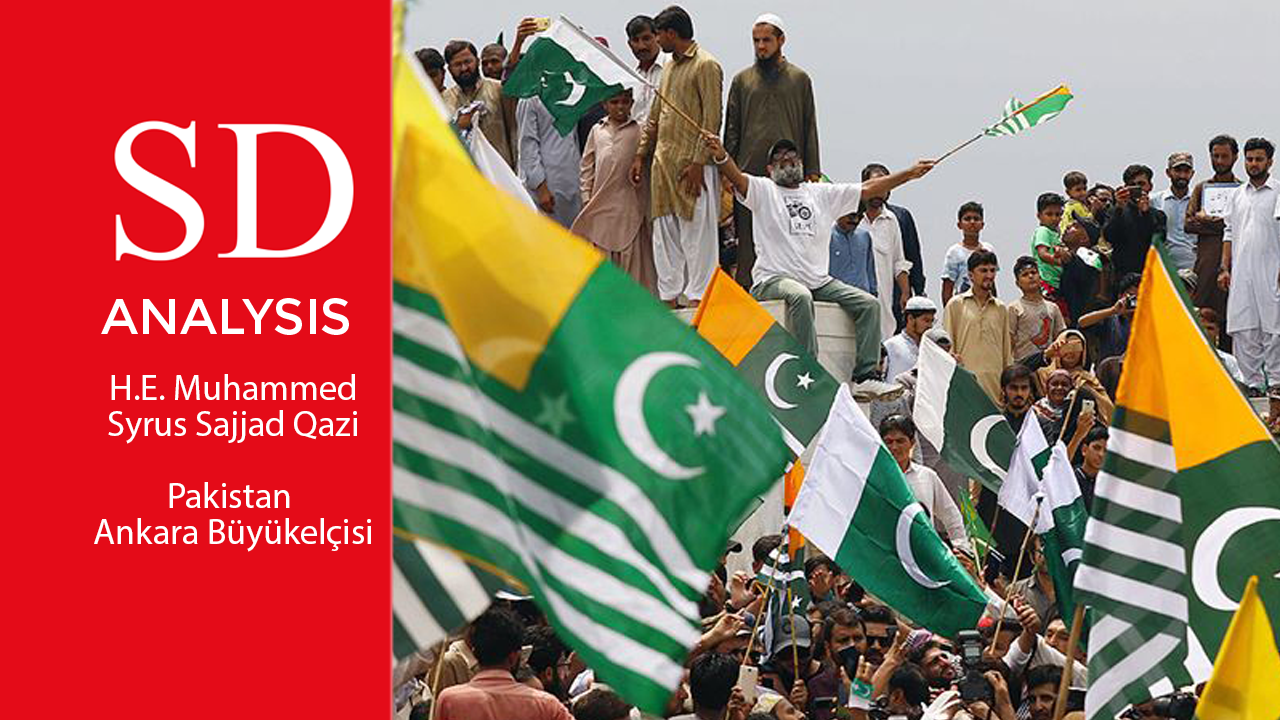 "As I stand here before you, we are witnessing one of the most serious human rights and humanitarian crises of the contemporary times. This crisis, unfortunately, is unfolding right under the gaze of the international community and the perpetrator of this crisis calls itself a democracy.

For nearly a month now, the Indian Occupied Jammu & Kashmir (IOJ&K) has remained cut-off from the rest of the world – a virtual blockade imposed through the coercive force of guns and bayonets of nearly a million Indian soldiers. The blockade extends to the area of communications also-no telephone, no cell coverage, no internet, no media and press and certainly no human rights organisations and observers. We have heard of the iron curtain, in Kashmir we are seeing its Indian manifestation, the Saffron Curtain. Despite this clamp-down and severing of all communication links, bits and pieces of information continue to trickle out, and these point to an extremely worrying but familiar picture.

Kashmiris remain imprisoned in their homes. Access to hospitals, medicines and food supplies is being deliberately and systematically denied. Families have been left torn apart and stranded owing to imposition of debilitating curfews. Use of pellet guns as well as large-scale incarcerations and torture continue unabated. All political leaders and activists are in prison or under house arrest.

In other words, Indian Occupied Jammu & Kashmir is at present the largest concentration camp in the world.

But this is merely the tip of the bayonet holding nearly 8 million Kashmiris hostage.

Please don’t take my word for it – listen to what the international media is reporting on the prevailing situation.

“‘A Living Hell’ of Anger and Fear” is how New York Times described the situation in Indian Occupied Jammu & Kashmir on 10 August 2019. 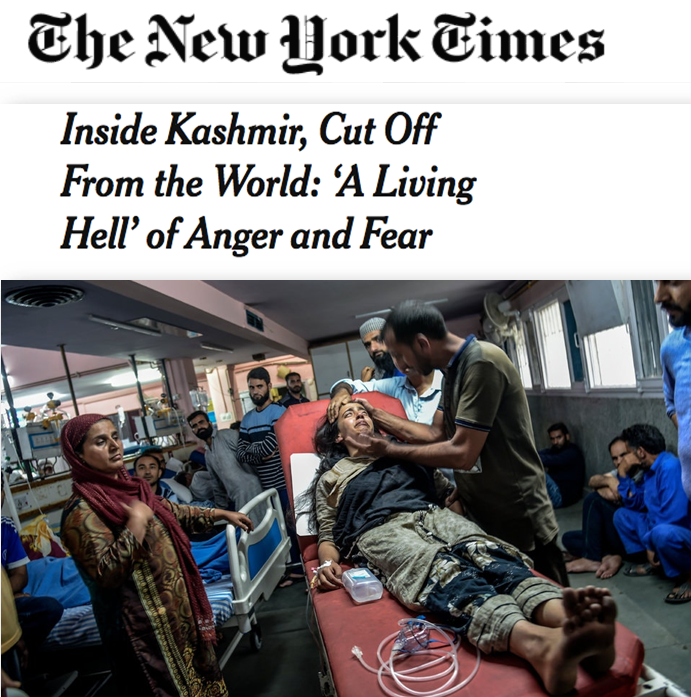 “Kashmir: Srinagar a maze of razor wires and steel barriers” is how Al-Jazeera portrayed it.

I can go on and on and quote hundreds of news items, from news agencies across the world that convey the same picture.

The prevailing situation is a text-book definition of collective, arbitrary, inhuman, and degrading punishment; excessive use of force; and violation of fundamental human rights – crimes cognizable under international law.

Quite righty so, India was called out by nearly a half dozen UN Special Rapporteurs on human rights on 22 August, who expressed their grave concern at the prevailing situation. These calls have been repeated by several other human rights watchdogs as well, over the course of the past one month.

These reports and statements contradict the official version that India wants the world to believe – a version that is as far removed from the reality on the ground, as India is from those it intends to continue occupying.

While the use of these inhuman tactics is nothing new to the Indian Occupied Jammu & Kashmir, where since 1989 alone, around 100,000 Kashmiris have been martyred, they nevertheless have reached a new low.

On 5 August 2019, the velvet glove of pseudo-legality that couched the iron fist of Indian occupation was finally taken off by India when through a so-called “Presidential Order”, the Indian government abrogated Article 370 of the Indian Constitution, rescinding Indian Occupied Jammu & Kashmir’s (IOJ&K) special status.

Separately, a bill was passed by the Indian Parliament to divide IOJ&K into two Union Territories (UT).

This illegal order also superseded Article 35-A of the Indian constitution, which defined the residents of IoK and limited subjects like property ownership and state citizenship to the current residents of the area until the final settlement of the dispute. Through these illegal actions, not only has India itself dismissed any and all notions regarding its sincerity to resolve the Jammu & Kashmir dispute peacefully, but has also signalled its intention to change the demographic composition of the region.

These measures remind us of another colonial usurper, which has been using similar tactics against the Palestinians - evicting them from their lands; encouraging settlers to encroach on the occupied lands; and using heavy handed and inhuman methods to silence any opposition.

The similarities are neither co-incidental nor unrelated. They are part and parcel of a larger wave of extreme ideological beliefs and narrow nationalism that intends to push everything and everyone in its path to the periphery through force.

Sadly, today Kashmiris find themselves yet again at the cross-hairs of this ideology.

To understand the events in the India Occupied Jammu & Kashmir, one must look at the subtle and not so subtle shifts within the political culture as well as ideological goals in our immediate neighbourhood.

What we are witnessing in Indian Occupied Jammu & Kashmir is merely a manifestation of the rising tide of right wing extremism, jingoism, populism and Islamophobia that has been sweeping many parts of the world. The worrying rise of Hindutva in our neighbourhood is part and parcel of this tectonic shift, which is sending tremors across our own region as well as beyond.

Demagogues and opportunists, in the garb of leaders, are becoming increasingly adept at riding the tide of Hindutva to electoral victories. Hate, coercion, fear-mongering, and intimidation have become new vehicles for social and political change under this ideology.

Again, I just merely need to draw your attention to an increasing number of incidents of cow-vigilantism; lynching of Muslims; as well as religious discrimination in India to understand the phenomenon.

The recent actions aimed at changing the status of Indian Occupied Jammu & Kashmir are a manifestation of the same undercurrents at a grander scale.

Writing in the New York Times on 30 August, Prime Minister Imran Khan pointed out that despite his repeated attempts to reach out to India with a message for peace, his every initiative was responded to with aggression. Recalling his peace initiatives he wrote and I quote:

“We were not simply up against a hostile government. We were up against a “New India” which is governed by leaders and a party that are the products of the Hindu supremacist mother ship, Rashtriya Swayamsevak Sangh, or R.S.S.”

From an ideology that denies others the right to exercise their religion and belief, considers the demolition of Babri Mosque in 1992 and the killings of Muslims in Gujarat massacre as its crowing glories, it is too much to expect that Kashmiris would be allowed the basic right to live, let alone their inalienable right to self-determination.

As long as this divisive ideology remains the guiding principle of politics and regional relations in India, there can be no peace in the region. 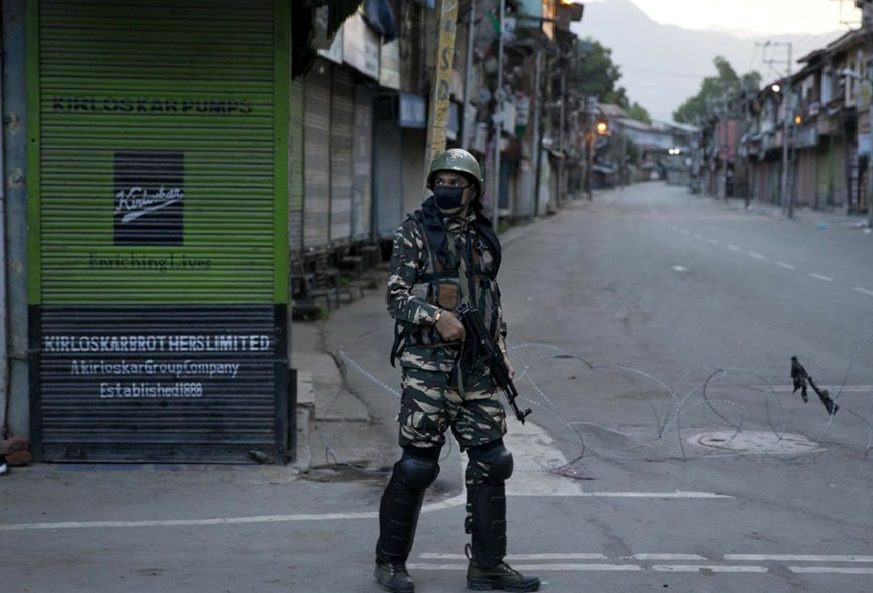 This brings me to the last part of my talk – the impact of the ongoing crisis in Indian Occupied Jammu & Kashmir on regional peace and security.

The Jammu & Kashmir dispute has been left festering for decades, periodically serving as a flashpoint for conflict between India and Pakistan.

The non-resolution of this internationally recognized dispute has previously led to wars and near-war situations between India and Pakistan.

In both cases, there is an abject disregard and callous imperviousness towards the relevant UN Security Council resolutions that guarantee and uphold the rights of those under occupation; allow them the right to self-determination; and recognize the disputed nature of the territories.

Irrespective of the recent illegal actions by the Indian government, Kashmir has been and remains an internationally recognized disputed territory.

It is hard to understand India’s collective amnesia on this issue despite the fact the disputed nature of the territory was recognized by India’s own founding fathers, including the first Prime Minister of India, Jawahar Lal Nehru.

It was India that took the Kashmir dispute to the United Nations on 1 January 1948 after war broke out between the two countries.

The UNSC Resolutions rejected India's claim over Kashmir and very clearly declared that the final disposition of the State of Jammu and Kashmir would be made in accordance with the will of the people of Kashmir expressed through the democratic method of a free and impartial plebiscite conducted under the auspices of the United Nations.

Again, India’s leadership itself pledged to implement these resolutions.

That is why India does not wish to hear the word United Nations Security Council in context of this internationally recognized dispute, despite aspiring to become its member.

This Indian aversion to allow the United Nations Security Council to play its mandated role in terms of maintaining international peace and security was dealt a huge moral and political blow on 16 August 2019 when the UN Security Council convened a meeting to discuss the Jammu & Kashmir dispute owing to the grave threat posed by the prevailing situation to international peace and security.

In the recent days, unprovoked cease-fire violations by the Indian forces across the Line of Control (LoC) have increased both in intensity and frequency.

At a time when tensions in the region are at an unprecedented level, India’s leadership has been issuing nuclear threats. Its Defense Minister recently said that the future of India’s “no first use” policy on nuclear weapons would “depend on circumstances.” Similar statements had been made by the Prime Minister of India during the election campaign, using nuclear weapons as a ploy to garner votes. 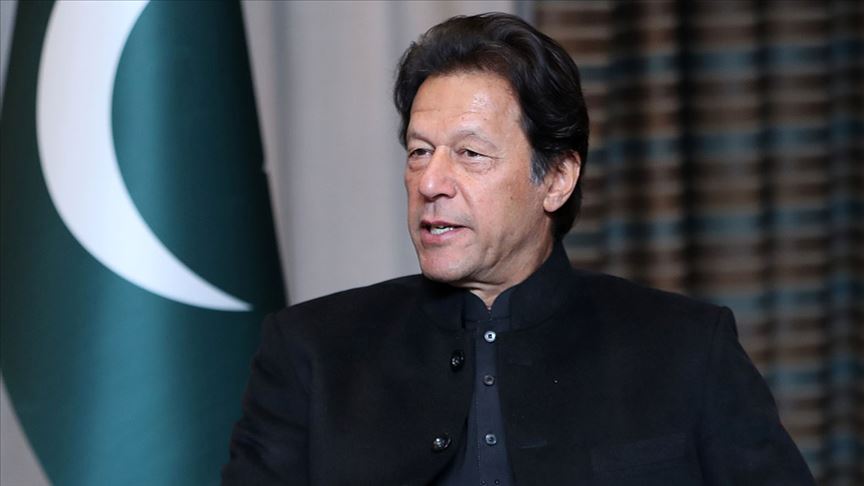 The Prime Minister of Pakistan recently warned that “If the world does nothing to stop the Indian assault on Kashmir and its people, there will be consequences for the whole world as two nuclear-armed states get ever closer to a direct military confrontation.”

Under these circumstances, it is imperative for the international community to step in and discharge its moral, ethical and legal responsibility by bringing an end to the on-going Indian gross violations of human rights and collective punishments against the Kashmiris; call on India to immediately lift the blockade of the Occupied Jammu & Kashmir; allow international human rights organizations and observers to access the region to assess the situation on ground; end impunity; and conduct an independent inquiry under the UN auspices to hold those responsible for decades of systematic, and gross violations of fundamental rights of Kashmiris.

We call on India, as the world’s largest self-described democracy, to practice what it preaches and implement United Nations Security Council resolutions for ascertaining the wishes of the Kashmiris through the democratic method of a UN administered plebiscite.

Turkey is an important member of the international community, and has an illustrious history for standing up for the cause of truth and justice globally.

The people and the Government of Pakistan as well as those suffering in Indian Occupied Jammu & Kashmir look towards the consistent and principled support of the brotherly people of Turkey to end the on-going human rights violations as well as to ensure the right to self-determination forwww the Kashmiris.

Inshallah, one day this dream will be realized." 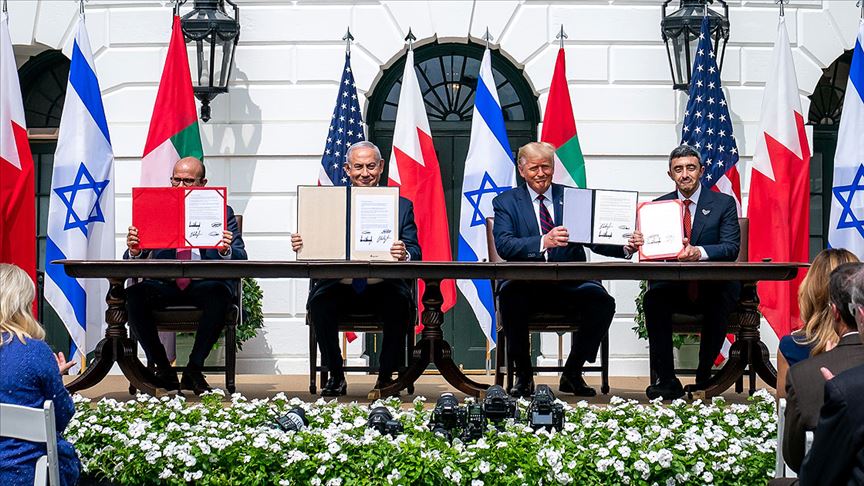 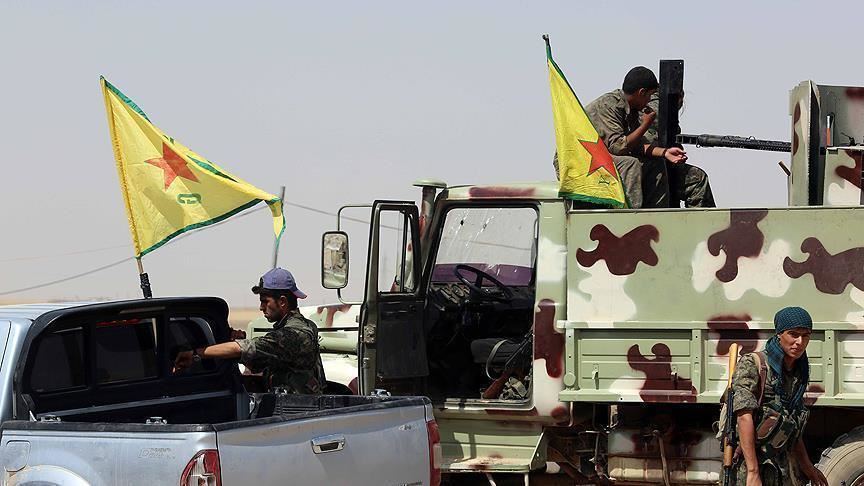 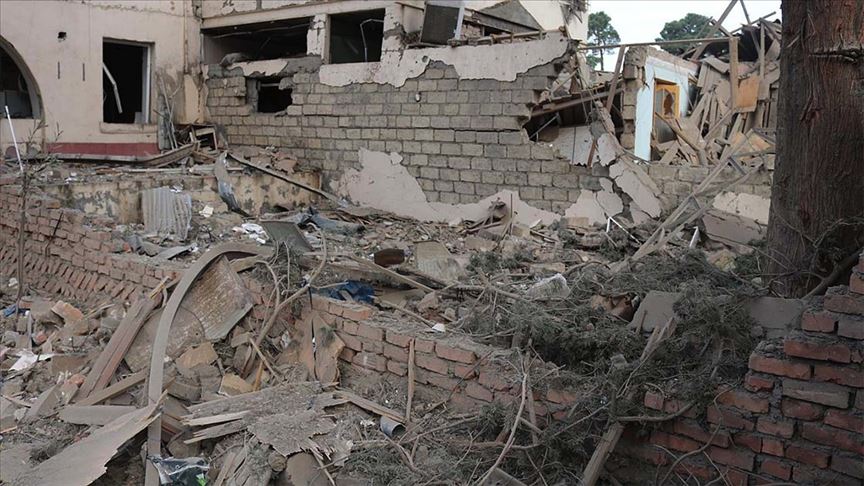